In 1974, the American Contract Bridge League (ACBL) Board of Directors voted to recognize the masterpoint achievements of all players and the Mini-McKenney Masterpoint Races were established. The Mini–McKenney was named after William E. McKenney whose drive, creativity, and organizational abilities helped establish the ACBL. He was the ACBL’s first executive secretary and remained at the helm until 1947.

The Mini–McKenney Masterpoint Races recognizes ACBL members who earn the most masterpoints (MPs) in sanctioned tournaments and club games within a calendar year (excluding the NAP/GNT qualifiers and STaCs games). The winners at each level of achievement are recognized by the ACBL each year in the April issue of the Bridge Bulletin and at the district and unit levels.

Eligibility is determined by a player’s masterpoint holding at the beginning of the calendar year. There are 15 race categories ranging from 0-5 masterpoints to 10,000+.

The home unit of each winner may purchase a Mini-McKenney medallion to present to the player. Standings are updated monthly. 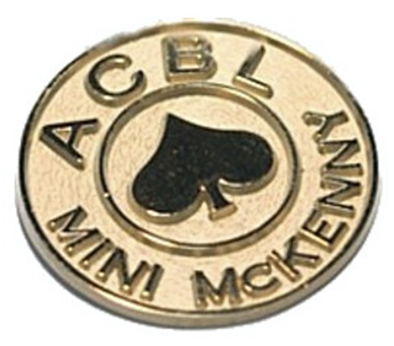